"From the beginning of the year through the end of April, I was focused intently on my studies at Johnson Bible College. About a month before the semester ended and once again after I had handed in my final exam, the Holy Spirit directed me to speak with the owner of the local SNAP Fitness about holding a Bible study there. I gave praise to God when I learned that the owner, Teena Fesperman, was already in the process of renovating a back room and that she had been inquiring with another local minister about using the space for some purpose in ministry. On behalf of Spirit and Truth Ministries, I asked Teena to let us use the space on Thursdays. She agreed, and I committed to lead the Bible study during the summer as part of my ongoing volunteer work for the nonprofit organization. Weekly meetings were held from Thursday, May 20 until Thursday, August 26.

The name I gave to the group was 'Casting Off Weights'. This choice was influenced by the Bible passage in Hebrews, chapter 12, verses 1 and 2. This choice was also influenced by my feeling that the group would provide accountability to the members for sticking to their individual health and fitness plans. The start of the Bible study was announced in two local newspapers, on a printed flyer (shown below), and through facebook.

I created a Bible reading plan so all of the members would read the same passages through the week and discuss them during the group meetings. Over the course of the previous two years, I read the entire New International Version translation of the Bible except for the book of Psalms. I wanted to finish this reading, so I chose Psalms as the focus of the study for the summer of 2010.

The facebook badge below is a link to the Casting Off Weights group page on the Facebook site (if the group were to become active again, the badge will show upcoming events). The first picture shows the front of SNAP Fitness where we held the Bible study. After that is the flyer made to advertise the Bible study. Next, you can see a copy of the calednar pages that attendees received every week showing the Bible scriptures to read for the following week with space provided for taking notes and keeping a log of diet and exercise progress. After this, you can see a snapshot of the Facebook page as it appeared on the first week of the study as well as after the last meeting. The last five pictures below were taken at the final meeting."


Casting Off Weights  |  Create Your Badge 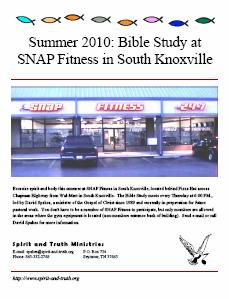 "Every year, Sheila's family descends on north central Kentucky for family reunion, and the tradition usually includes attending service at Horsley Chapel United Methodist Church. On Sunday, June 13, I had the opportunity to sing two songs. I sang 'I Will Rise' with Sheila and 'The Lighthouse' with my mother, Ruby Lea."

"Almost one year to the day since our previous visit, Sheila and I volunteered for Spirit and Truth Ministries once again to go to the Rocky Branch Independent Holiness Church of God in Walland, Tennessee and participate in their second Friday night singing service on July 9, 2010. We were joined by my mother, Ruby Lea, and her father, Bill, to represent the Spirit and Truth Singers, and also by friends. Follow this link to see a complete set of pictures of the event.

While I stood in front the congregation with Sheila and my mother, I gave two testimonies that you can watch by clicking on the links below. The first is a testimony about my salvation. The second testimony turned out to be significant for the work that God would shortly be assigning to me. For years, my mother and I sang a song called 'Peace in the Valley' (not the popular one that most everybody knows, but a different and almost unknown song), and I would give this same testimony, more or less, every time we would sing it about how each person has the unique ability to reach a certain group of people for Christ. I didn't realize until later that, while I was saying the words, I never really thought about applying them to myself to understand my own calling from God.

"Ruby Lea, Sheila, and I traveled to Florida and spent the first week of October together. We ministered for two services at Wayside Full Gospel Church. We sang songs together, and I preached and prayed for members of the congregation.

These pictures were taken on Sunday, October 3. The service began with an elder brother taking the floor and addressing the pastor and his wife, rejecting the prayers they had prayed for him and returning a bottle of anointing oil they had given to him. The mood was somber after he left the building, because the devil had tried from the beginning to undermine the service, but the Holy Spirit turned it all around during the congregational singing as people began to come to the altar. I came forward to pray for the people, taking authority over sicknesses and oppressions of the devil in the name of Jesus. I used the bottle of oil that had been returned by the elder brother to anoint those in the congregation who received it joyfully, and so God poured out what seemed to be an extra special blessing. I ended the service with a short sermon and by singing our special songs.

These pictures were taken on Thursday, October 7. There was a small crowd for this mid-week service, but the Lord was present. After a few special songs were sung, I preached the evening sermon."

Completed My Program of Study at Johnson Bible College

"In early December, I handed in my final paper for the last course I needed to complete the graduate certificate program at Johnson Bible College. Since 2007, I had spent many long nights after work to read, study, and write out my responses for the examinations. For this final course, I spent a lot of time doing research online and at the library. My original certificate (left) arrived by mail after the New Year in January. Not long after, the college changed its name to Johnson University, and they reissued my certificate with the new name (right)." 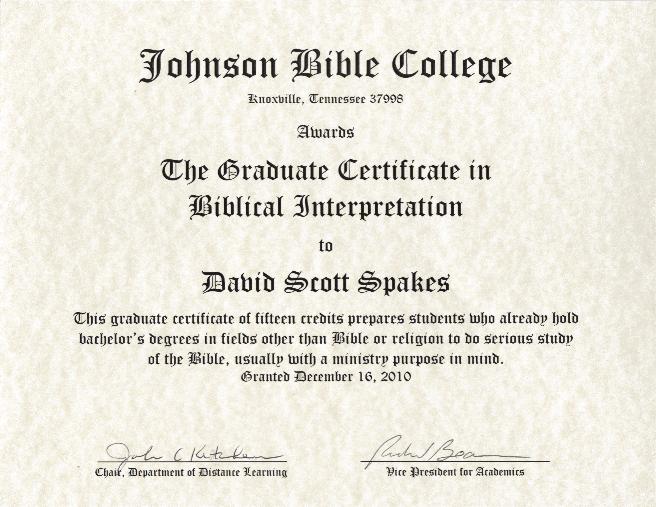 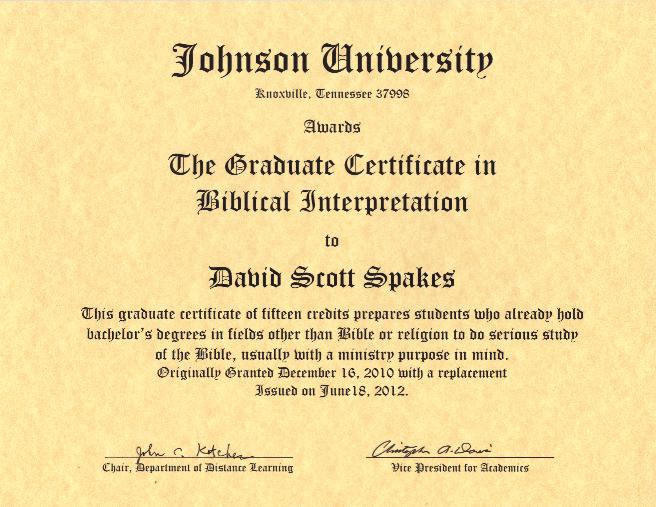 Worked in the Nursery at Pathways, Sevierville, TN

"With my college studies behind me, I had a little extra time on my hands and decided to give some of it to Pathways Church where we had been attending since 2008. One of the office workers had been after me to volunteer one weekend a month like Sheila had already been doing for a while, and I said Yes and asked to be Sheila's helper in the 2-year-old classroom. Sheila and I did this work together for about a year.

"In the early winter season, I was eating at Chepas Mexican Restaurant in Seymour with a friend. We were discussing church planting as we ate our lunch together. The restaurant manager, Juan Severiano, overheard part of our conversation and introduced himself. He said that his restaurant did not open until lunch time on Sundays, and he offered to us the use of the building at no cost if we decided to start holding church meetings (Wow!, I thought). I met with Juan a couple of times over the next week and I learned that the restaurant was struggling financially. I talked about this situation with a few others including my mother, Ruby Lea. She and my father-in-law, Bill Adcox, would occasionally dress up as Santa and Mrs. Claus, and they offered to play the part. We devised a plan that would both generate interest in a new church and possibly generate some new customers for the restaurant. The plan was to have the Clauses make appearances over several days, and anyone could bring their child for a photo, but patrons of the restaurant would be able to move the front of the line when they arrived. We started to execute this plan, and the restaurant was passing out the VIP cards in the early part of December to people who came into the restaurant and ate a meal there. Unfortunately, the year-end review of the restaurant's financial situation was more dire than Juan had previously estimated, and the restaurant had to close before the dates when the Clauses were supposed to make an appearance."