"I returned from my trip to Cocoa Beach, Florida with news from my mother that a new church had opened right across the street from our house in Harriman. The very next day was Sunday, and she asked me to go with her to church there. She had told the pastor that I was called to preach, and that morning the pastor approached me with a question. His first words to me were, 'Are you going to preach this morning or tonight?' After I picked my jaw up off the floor, I told him at first, 'Tonight.' But then God brought to my remembrance the sermon He had given me during those nights of prayer in Florida. Quickly, I changed my mind and told the pastor, 'I will preach this morning!' So, the first time I ever stepped foot into the Free Pentecostal Church, I preached the Sunday morning service. Not long after this, I decided to join the Free Pentecostal Church, and during the next two years I had many more preaching opportunities. Here is a short clip from a sermon that I preached on Easter Sunday, April 15, 1990 called 'Who Hath Believed Our Report?' (based on Isaiah 53 and Matthew 28:11-15)."

"For one of the two years that I attended the Free Pentecostal Church, the church sponsored a weekly live radio program for which I was the organizer and primary speaker. Below, you can see some advertisements for the radio program that appeared in a church publication and in a local newspaper called the Quin-County Advertiser. You can also listen to a few recorded sounds clips. I called the program the Spirit and Truth broadcast based on the scripture in John, chapter 4, verse 24."

"I was attending Roane State Community College in 1990, and the leader of the Baptist Student Union, Jeff Nave, was also the pastor of Piney Grove Baptist Church in Midtown (an area of Harriman). He had heard me speaking on the radio and invited me to sing at his church on Sunday, May 20.

I grew up attending another Southern Baptist Church in Harriman, so I was welcomed into the Piney Grove congregation. However, on this day I became a little more aware of how some of my views on Christian doctrine had changed from my Baptist upbringing. During the Sunday School lesson, Pastor Nave interpreted Jude 9 as saying that the archangel Michael didn't have power to combat the devil, so therefore Christians don't either. I managed to hold my tongue and maintain my composure until Sunday School was over and the morning Worship Service had begun. Pastor Nave introduced me, and finally it was my time to sing. I felt the Lord told me to say that Christians can stick their tongues out at the devil and say 'nya, nya, nya nya nya, you can't get me!' Becuase of Jeff's interpretation of Jude 9, I quoted 1 John 4:4, 'greater is he that is in you than he that is in the world.'

My singing and testimony were well received. I sang the 'We Bring the Sacrifice of Praise/Alive, Alive/You are a Chosen Generation' medley and 'Amazing Graze.' The congregation joined me in clapping to the music (I quoted Psalms 47:1). I lifted holy hands in worship of God during the singing just as I normally would. After it was over, Pastor Nave commented that they had a spark plug on their hands."

"I think it is so important to take time once in a while to minister to people who have no way to give back. This picture was taken at Johnson Health Care Center in Harriman, Tennessee with Gertie Brown, a lady that I visited several times. Over the next five years, my mother Ruby Lea and I did occassional visitation at this and two other nursing homes in Algood, Tennessee and Pigeon Forge, Tennessee."

"Within a few months of my starting to attend Free Pentecostal Church, I asked the pastor about the process to become an ordained minister. He said that he would help me, and his only question was whether I wanted to be ordained by the local church or by the denomination from which he had received his license. Out of respect for him, I chose to be ordained by the local church.

During the evening church service on October 21, 1990, I was given the charge of a minister by my Pastor, Reverend Arthur York, Jr. (pictured shaking my hand). The elders of the church and some visiting ministers laid their hands on me and prayed for God's anointing. After this service, I was on probation for five years. I had to return to this church at the end of my first year, third year, and fifth year as a minister for review of my status. When this process was complete, I received my permanent certificate of ordination (in 1995).

Pictured sitting in one of the pews is the man who got me started playing the guitar, Brother Billy Gann. Two dear friends from my former church, Danny and Becky Stimmie, came to be present for my ordination service, and she played the piano and sang some special songs." 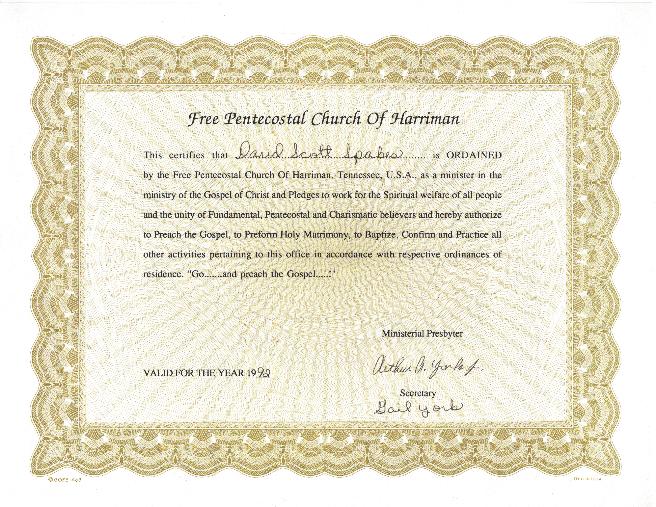