"Shortly after the turn of the year, a major world event happened. The First Gulf War began when the United States and its coalition partners began to repel the nation of Iraq, which had invaded the nation of Kuwait. Since these events were happening in close proximity to the nation of Israel, and since the Iraqi leader was threatening to retaliate against Israel, I felt that it was important to send out a daily message encouraging radio listeners to pray for Jerusalem. I changed the format of the broadcast, reducing the length to fifteen minutes a week so that a commercial could run in its place."


Preaching at the Church of God of Prophesy, Harriman, TN

"I began to have opportunity to preach at other churches in the area, and one of the first was the Church of God of Prophesy in South Harriman, where Dean Yancey was pastor. These pictures were taken on July 14, 1991 in the early morning before we drove to church. We were preparing to load into the trunk of the car a prop I had made to go along with the sermon that I preached during the evening service that day (I was allowed to keep the prop hidden in the back room of the church so no one would see it until time for the evening service). The topic of the sermon was: What God sees when He looks at someone who is saved."

"During my first year as an ordained minister, I was presented with a sum of approximately two-thousand dollars. The giver stated that they wanted me to use the money for God's work, but at first I greatly resisted the offer, saying that the money should be given to a church instead of me. The persistance of the giver was a burden to me, and I prayed a great deal regarding this matter. One day as I was reading my Bible, these words from Acts chapter 4 leaped off the page at me and seemed to me to be the answer to my prayer: 'from time to time those who owned lands or houses sold them, brought the money from the sales and put it at the apostles' feet, and it was distributed to anyone as he had need' (Acts 4:32-36). I determined to start a nonprofit organization and use part of the funds to provide financial assistance to needy individuals. I was motivated by the desire to have the financials be in the public record that explained how this gift (and potentially other gifts in the future) would be used. This money did not belong to me, but it belonged to God!

"In the Fall of 1991, I transferred from Roane State Community College to Tennessee Technological University to complete my Bachelor's Degree. The university required each incoming upperclassmen to be a dormitory resident for one year. During this time, I commuted home to my mother's house almost every weekend, and on Friday nights through the Fall semester, I would literally get out of my car and immediately begin setting up a PA system in her front yard, which was located on the main street of town. For a few hours, another preacher and I would preach and sing, and friends would give their testimony to anyone who would listen. This location of downtown had few pedestrians in the evening, but across the street there was a restaurant and a car wash, and people would frequently park their cars in the parking lots there and listen to us.

We tried to speak personally with some of the people who parked across the street and listened to the preaching, but we quickly learned that this was not very effective, because when approached they would usually drive away. We wanted to have a tract to offer to our listeners so they could make a decision for Christ after they left. I designed a tract called 'Introduce You To the Family', and Spirit and Truth Ministries paid the cost to make the copies. 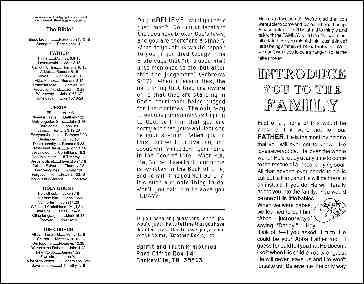 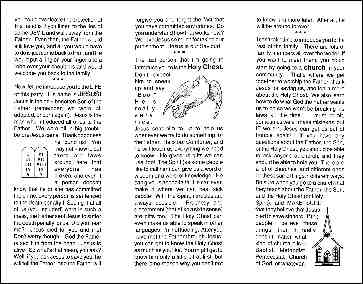 Here are some pictures of the location where we held the street preaching. The first picture is the view of my mother's house from across the street. The next few pictures show a 'Jesus Loves You' sign that we made (planning, the stencil, and the finished sign). Finally, the long picture is a collage of photographs that provide a panoramic view of Roane Street and the parking lots across the street where people would park and listen to the preaching. The left side of the picture is the view towards South Harriman, and the right side of the picture is the view north towards Walnut Hill. The businesses in between are Jim's Burgers and the Robo Car Wash."